If you have a few extra ETH, try to create passive income from the game.

Sandbox is an online computer game in the sandbox genre. Visually, it resembles Minecraft, since objects also consist of cubes. The entire territory is divided into plots that users can buy. The owner of the plot has access to terraforming and construction of any objects on the territory of his land. In addition to buildings and natural objects, various creatures can be placed and games in which other players can take part can be created.

Everything in the Sandbox is a NFT. And these NFTs are divided into two types:
LAND – plots of land;
Assets — all other game objects, including clothing, skins, creatures, buildings, interior items, etc.

Items and plots are sold on the game’s marketplace and on the Open Sea.

SAND (view the course)
The main token of the game, it is used for buying LAND and ASSETS.

How to Start Playing Sandbox

To get started, you need to create an account. To do this, you will need one of the three supported Ethereum wallets:

After registration, you can choose the appearance of your character from the suggested ones or assemble it from individual elements.

Since the game is undergoing alpha testing, there is currently no way to start playing. In November 2021, the first alpha version was released, access could be obtained with a pass. The next testing begins on March 3, 2022. This time, according to the company, anyone who has registered an account can participate. Sandbox announced a competition for the distribution of free passes, there is a possibility that only the players who received them will have access. During testing, you will be able to visit locations and games created by Sandbox partners.

A pass for the first alpha version cost $ 13,000, owners received 1000 sand coins and 3 NFT as a gift for completing quests and visiting objects in the game.

The game consists of visiting the sites of other users, participating in their games and developing their own land.

Players can create games on their land for free through the Game Creator software and create static and animated objects for free through Voxredit software. Right now they are only available for Windows. 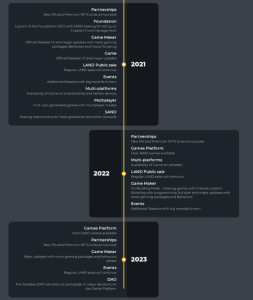 How to make money in the Sandbox

Earnings in the game are based on the use of purchased plots. They can be resold, leased and charged for:
participation in games hosted on the territory;
visiting the land.

The cheapest plot is sold on OpenSea for 3 ETH.

There is also an opportunity to win the sand currency by participating in games and quests of other users.

You can also earn money by selling created NFTs, but this opportunity is only available to participants who have received the status of an artist. To do this, you need to send an application to the game foundation and get encouragement.